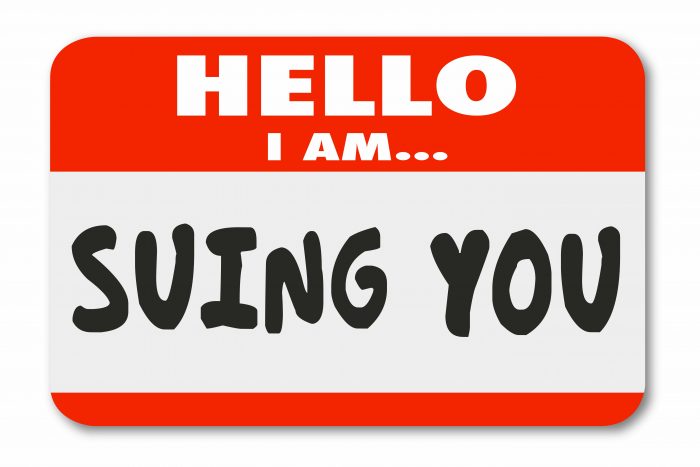 It’s a lawsuit happy world. The barrier to entry for a lawsuit isn’t very high: you can pretty much get sued for anything at all. But there are a few crazy things that tend to pop up a little more frequently than others.

If you’re tired of your lunches being stolen, it may have occurred to you to put a little hot sauce on it and wait it out. But this is considered booby trapping, and it’s not legal. You can’t intentionally set up a trap to cause someone harm, even if they are stealing your stuff.

2. Posting a Meme on Your Page

Some memes are actually made out of copyrighted photographs. Put that meme on your Facebook account or your personal blog, and you could find yourself the recipient of a cease-and-desist.

3. Talking Poorly About a Coworker

Let’s say Tom is late again. And you post that on your Facebook page: I cannot believe Tom Smith is late to work again! He’s incompetent!

Well, now when Tom’s next employer looks his name up, they’re going to see this. And you could get sued for damaging Tom’s reputation.

Most pranks aren’t very funny. But let’s just give you the benefit of the doubt and say you’re recording a very funny prank. It could be illegal. Some states require two party consent for any kind of audio, including the audio in a prank video.

5. Texting Someone While Driving

This may seem crazy, but yes: texting someone else while driving can get you in trouble. However, you need to know that the person is driving, and you need to be reasonably assured they’ll respond to your text first. At that point, it can be argued to be negligent.

You may be wondering where else you should leave reviews. And that would be a fair question. But the problem isn’t just leaving bad reviews: it’s leaving bad reviews that can be considered to be false. And anyone can claim your review was false.

Why You Should Consider Uninsured Motorists Coverage

When Was the Last Time You…?

Life Insurance Is Not About You

Are You Legally Required to Carry Business Insurance?

Why You Should Consider Uninsured Motorists Coverage

When Was the Last Time You…?